I spent three winters in Mexico in my time working on cruise ships, and in that time, ate a lot of excellent meals.  There's nothing better than sitting at a restaurant on the beach under an umbrella, with a plate of tacos, a bowl of guacamole and freshly cooked tortilla chips.  I once had a guest on the ship ask me if I ever had time off.  I told him that, yes, we do get a few days off the ship every week to go into port, and he said, "no, I mean you personally...you look like you haven't seen the sun in months!"  1. I don't do well in the sun.  2. I'd rather be eating tacos under an umbrella than suntanning.  So that is what I did for three winters!

Another story about this recipe:  I have had two power outages in my condo in the past week...not sure what the problem is yet, but I was actually cooking this when I had the second power outage.  It was out for 1h20, but I plugged it back in and carried on cooking it when it came back on.  It still turned out exactly as I had hoped!

Spray slow cooker pot with Canola spray. Place beef chuck in pot.  Mix spices together and cover all sides of beef chuck evenly with spices.  Pour beef broth over top and squeeze in lime juice. Set slow cooker on low and cook for 8 to 9 hours (mine cooked for 8).

Nutrition (per 1 taco with all the toppings) 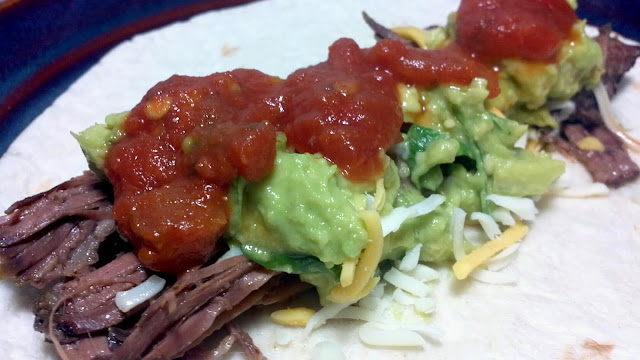