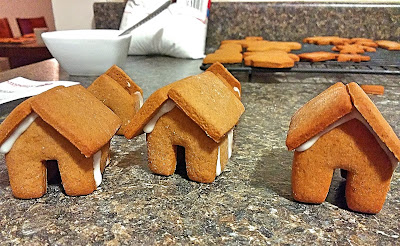 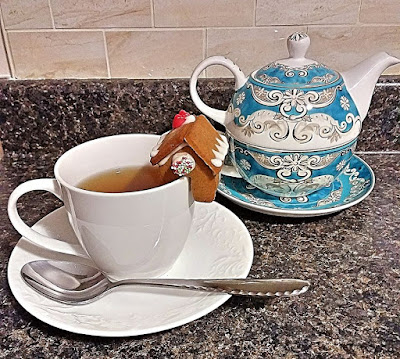 My mom makes the best gingerbread cookies. Gingerbread cookies are often too hard or crunchy, but hers are soft and chewy. I used her recipe, but swapped out the margarine for butter. The key to this recipe is to make the dough in advance and allow it to rest in the refrigerator for at least 2-3 hours (I refrigerated my dough overnight). It is necessary to refrigerate it for several reasons: To allow the gluten to rest to prevent a "gluey" texture, to allow the butter to firm up in the dough (this recipe has no eggs to hold it together), and to prevent the dough from spreading too much in the oven (which maintains the cookie cutter shape).

For Christmas, I purchased this tiny gingerbread house cutter from amazon.ca, because they are so adorable! I wanted to make a gingerbread house, but gingerbread houses are difficult to store to keep them fresh, and no one wants to be the first person to dive in and break the house to start eating. These tiny teacup gingerbread houses means everyone gets their very own house! They are a little extra work, but everyone loved them.

I used Alton Brown's royal icing recipe to make the icing for the Christmas cookies.

If you have a stand mixer, you can put all the ingredients in there, starting with the wet ingredients, followed by the spices, flour and baking soda.

Note:  My mom's recipe says to bake these at 375°F, but my oven runs hot, so I usually have to adjust the temperature when I bake. I baked mine at 350°F for 8min30s for the tray of the small ghosts and medium bats, and 9 minutes for the large pumpkins. The recipe made three baking sheets worth of cookies in various sizes, so the yield is a little hard to determine, but it was around 30 large cookies, or 48 small/medium cookies.

In a large bowl, cream butter and sugar. Blend in molasses and maple syrup.

In a second bowl, combine flour, salt, baking soda and spices. Add dry ingredients and water to creamed mixture. Knead well until blended and form into a smooth ball. Cover and chill for at least 2 to 3 hours (or overnight).

Bake for 8 to 9 minutes (8min30s is perfect for my oven). Allow to cool fully, then decorate with icing (optional). 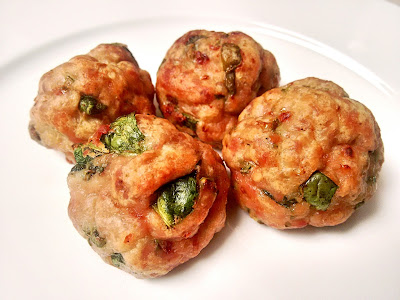 These meatballs were a hit! They can be made with ground turkey or chicken, and they pair well with both tzatziki for dipping, or pesto for serving over pasta. Freeze them and reheat in the oven for an easy weeknight dinner, or prepare them in advance for a party appetizer.

Combine all ingredients in a large mixing bowl. Mix well with a spatula, then coat hands with a couple drops of olive oil. Use hands to form the mixture into balls. Space the meatballs evenly on the baking sheets.

Bake for 18 to 20 minutes, until lightly browned on top. Transfer baking sheet to cooling rack and use a spatula to loosen the meatballs from the foil to cool. 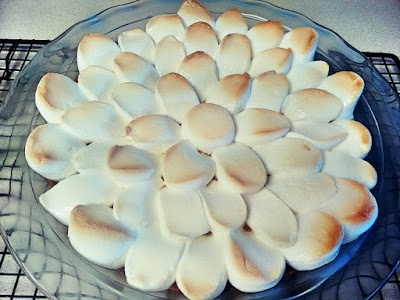 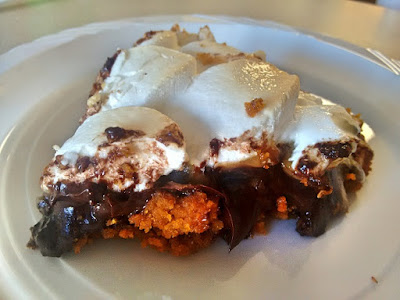 This pie doesn't necessarily fit in with the other dessert recipes on this blog, because I didn't make any effort whatsoever to reduce the saturated fat or sugar. I made it for my boyfriend's daughter's birthday party, and it was a hit with our 11 year old guests!

We had an (indoor) camping themed birthday party, for which we decorated the dining table in green complete with a camping lantern, mason jars labelled "Squirrel feed" for nuts, "Don't feed the bears" for pretzels, and "Catch of the day" for Goldfish crackers. Of course, I had to put my mad napkin folding skills to use to make the Bishop's hat. I knew working on a cruise ship would pay off someday! 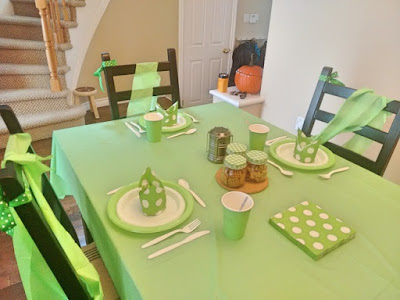 The seating area had sleeping bags and pillows spread out on the floor. The kids played camping themed Pictionary on a white board, made friendship bracelets and listened to ghost stories (this podcast is just awesome, so even if you're not having a party, it's a great listen).

Anyway, back to the pie:  It is fairly easy to make, but it is time consuming, because each layer has to set before you can add the next layer. You can have all the layers ready and place it in the refrigerator the night before, so all you have to do the day of the party is toast the marshmallows. I had never made a graham cracker crust before, so I wasn't really sure if I should bake it or refrigerate it before adding the ganache. I decided to bake it, which made it shrink a little, which I googled afterward to see what I did wrong--from what I read, it is not recommended to use a glass pie dish for a graham cracker crust because it will slide down the sides during baking. My mistake actually turned out just fine, because the marshmallow layer covered it anyway. You can, of course, just use a pre-packaged graham cracker crust.

Mix honey graham crumbs and butter in a large bowl. Press firmly into pie pan, evenly covering the bottom and sides of the pan. Bake at 300°F for about 8 minutes. Allow to cool fully before adding the next layer.

Break chocolate up into pieces and place in a glass casserole dish that has a lid. Pour whipping cream into a small saucepan and set heat to low. Stir occasionally, and watch the cream carefully. When it comes to a simmer, pour the cream into the casserole dish to fully coat the chocolate pieces. Place the lid on the casserole dish and set a timer to 5 minutes. After 5 minutes, remove the lid and lightly whisk from the centre outward. The chocolate will melt and the ganache will begin to thicken. Once the mixture is uniform, spoon or pour the ganache carefully into the graham cracker pie crust, and spread evenly using the back of a spoon. Allow to cool on the countertop for at least 15 minutes, then refrigerate to set for 30 minutes.

Place peanut butter chips in a glass casserole dish with a lid and repeat the procedure used above for the chocolate ganache. Allow to set, but do not refrigerate. The peanut butter ganache should still be slightly sticky when adding the marshmallow topping.

Cut (with scissors) one marshmallow in half through the centre and place in the middle of the pie, on top of the peanut butter ganache layer. Slice marshmallows diagonally into halves. For an example of how to cut it, check out the directions on this cupcake decoration tutorial (specifically, direction #1). Place diagonally cut halves in a circle around the centre and work outward until pie is covered. The end result will look like this: 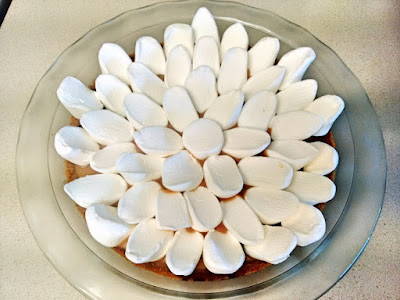 Cover with tin foil and refrigerate the pie until about 30 minutes before serving.

To toast the marshmallows:
Set your oven to broil. Uncover the pie and place in the oven. Rotate the pie every minute to make sure that it is evenly toasted. To lightly toast the marshmallows, it will take about 8 to 10 minutes. Remove from the oven and allow to return to room temperature before serving, about 20 minutes.

I will spare you the nutrition information with this one. :)
Posted by Amanda Firby at 06:08 No comments:

Email ThisBlogThis!Share to TwitterShare to FacebookShare to Pinterest
Labels: Desserts 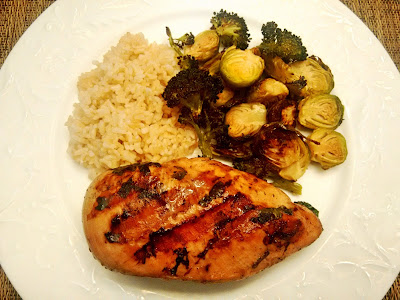 This chicken was everything I dreamed it would be! It was flavourful and moist, and it was so easy to prepare. I saw a similar recipe on Whole Foods Market recipes , and adjusted it slightly.

I marinated eight large chicken breasts, basted them throughout the grilling process, and still had quite a bit leftover, so this recipe makes enough marinade for ten to twelve chicken breasts.

Place raw chicken breasts in a large bowl. Mix all other ingredients together and pour over top of the chicken to fully coat. Cover the bowl with plastic wrap and refrigerate for 4 to 8 hours. 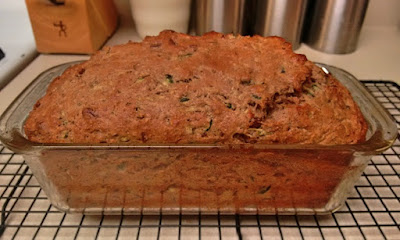 I was given some vegetables last week, and one of those veggies was an enormous zucchini! We grated the zucchini for this recipe, and didn't even use the whole thing. It would have produced about five cups worth, but we only needed three. Check this thing out: 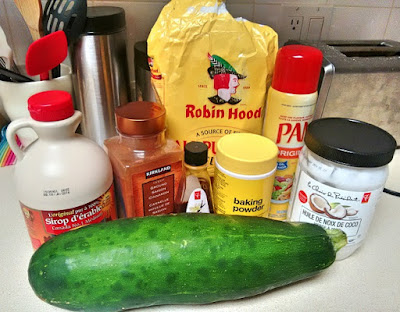 I always struggle with the baking time when I make zucchini bread. I can bake a banana bread, a carrot loaf or a beer bread in 30-35 minutes at the same temperature in the same loaf pan, yet zucchini bread always takes twice as long. This one took 60 minutes! It was delicious though, so it was worth the wait.

Pecans add heart healthy monounsaturated fats, fibre and protein. You can swap the pecans for walnuts in this recipe if you prefer. We buy the giant bags of pecans, walnuts and almonds from Costco, which are much cheaper than buying pecans from the grocery store. I ground the pecans up in the food processor, so some were ground finely like almond flour, but left some in small chunks to add some texture. I measured 1 cup of pecans whole, then ground them, so it was probably a little less than 1 cup after that.

Grate zucchini and set aside.

In a second bowl, add vanilla extract, maple syrup and coconut oil and mash together with a fork. Add eggs and mix together. Pour zucchini into the bowl and mix again.

Pour wet ingredients into dry and fold together. Transfer batter to loaf pan. Bake for 50-60 minutes. Insert a toothpick into the centre of the loaf, if the toothpick comes out clean, the loaf is done. Set on a cooling rack and run a paring knife around the sides of the loaf to loosen it.